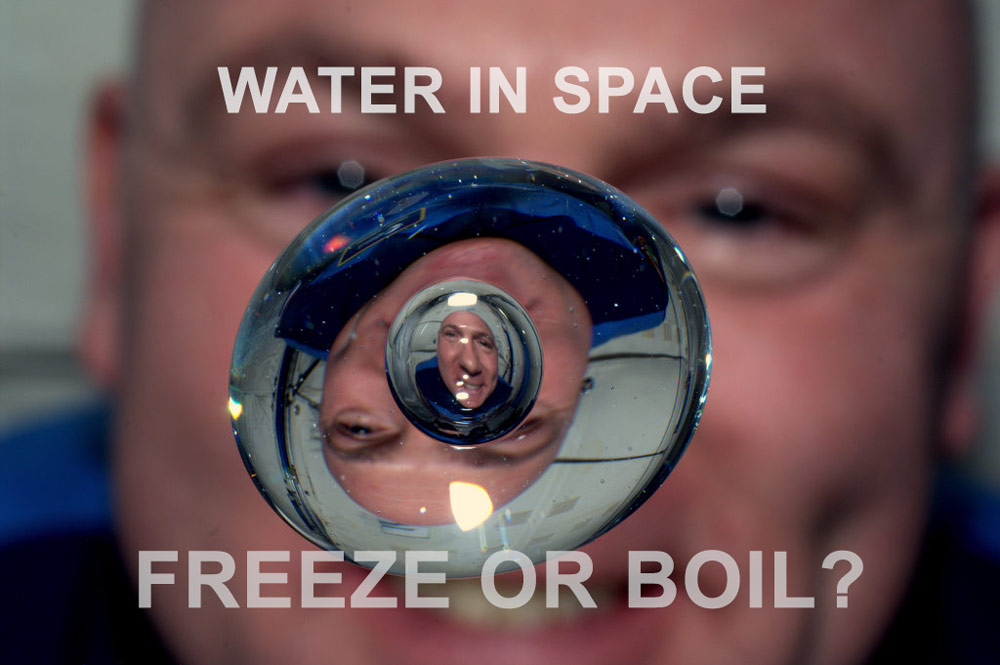 “You can’t cross the sea merely by standing and staring at the water.” [1]

What will happen if you bring liquid water with you in your spacecraft and pour it outside into the cold vacuum space? Will it freeze or vaporize?

The Earth is one of those extremely rare places where H2O can exist stably in liquid form. And also in plenty of amount. Around 70% of Earth’s surface is covered with water. If we add up all the oceans and water bodies on Earth together, it will weigh more than 1018 tonnes, about as massive as Pluto’s giant moon, Charon!

Factors Responsible for State of Water

Actually, on the Earth, we may find all the three states of H2O (water) i.e., ice (solid), water (liquid), water vapor (gas). But there are some conditions due to which water exists stably in liquid form. Our Earth is just at the right distance from the Sun so that we have just the right temperature to resist water from freezing. And our Earth has an atmosphere which exerts the right amount of pressure (101.325 x 103 Pa) to restrict water molecules from flying apart to diffuse into gaseous form. If we say in a different way, the standard atmospheric pressure on Earth can be shown as 6 x 1022 hydrogen atoms pushing down on every square meter on Earth’s surface. [2]

So we see, the state of water depends on two important factors: Temperature and Pressure. So for water to remain in liquid form it requires a certain amount of temperature and pressure. 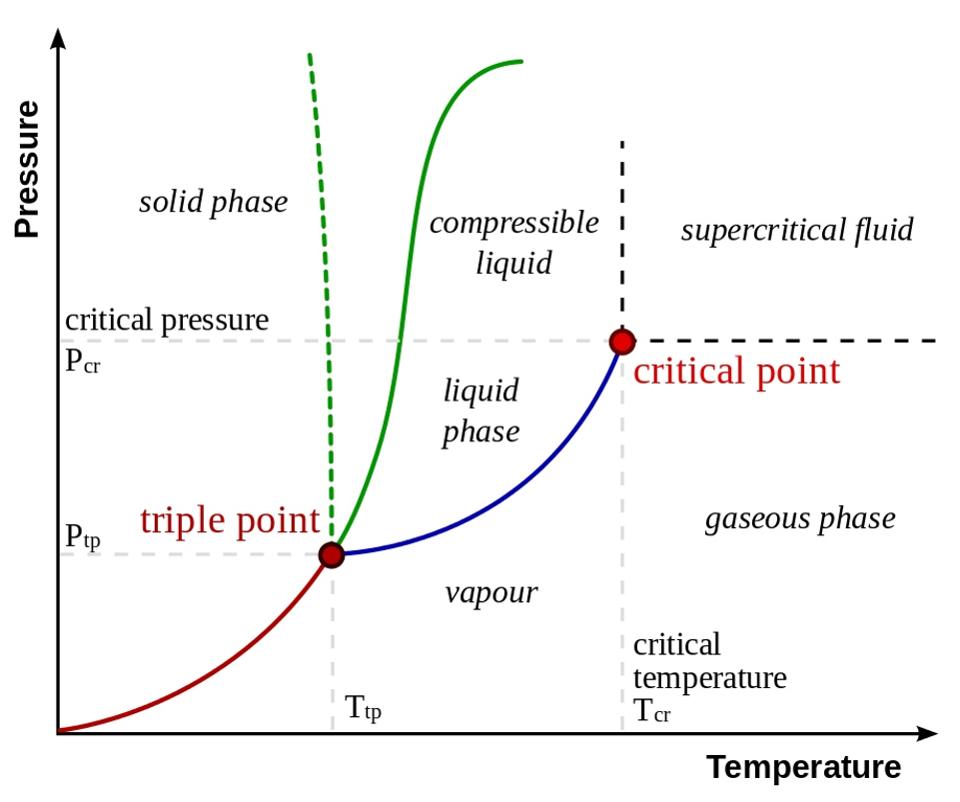 How liquid water can turn into ice or vapor depending on pressure and temperature | Credit: Wikimedia commons user Matthieumarechal

If we take liquid water at constant temperature and drop the pressure in the environment around it, we’ll see it boil. You may be familiar with the fact that at higher altitudes, water boils at a lower temperature (< 100°C), where the standard boiling point of water is 100°C; this is because there’s thinner atmosphere above you, and hence the pressure is lower. We have another severe example of this phenomena: if we put liquid water in a vacuum chamber and suddenly evacuate the air, what happens to the water? It boils violently and turns into vapor!

Again if we take liquid water at a fixed pressure and lower the temperature, it will freeze immediately into ice. We can easily observe this phenomenon on Earth. For example, in a place where the temperature is below 0°C, we find water mostly in the form of ice.

But space is different.

How is Space different?

While Earth has both atmospheric pressure and suitable temperature, space has none. Space is totally vacant, so there is no pressure. Actually, interstellar space has a pressure that is millions or even billions of times smaller than what we create in our vacuum chambers. Again space is very, very cold. If we go to interstellar space, far away from any star, the only temperature comes from the leftover glow of the Big Bang: the Cosmic Microwave Background. The temperature of this radiation is only 2.7 Kelvin, very much near to the absolute zero. This temperature is cold enough to freeze hydrogen into solid, so you may imagine what will happen to water. It will freeze.

But wait, space again don’t have any pressure, so water should boil. So, what will happen to water? Will it freeze or boil?

What will happen to Water in Space? 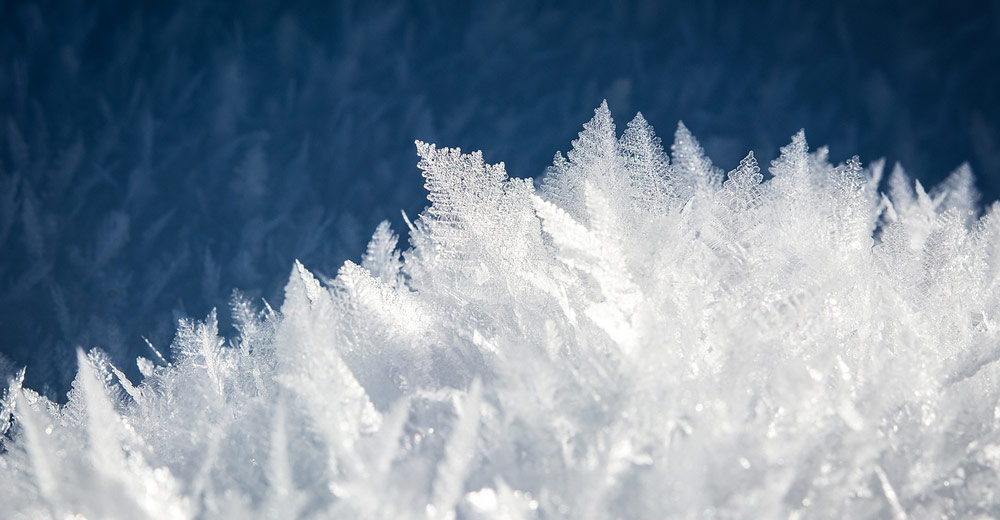 However, we can bring liquid water to space (places like the international space station) where it can be kept in Earth-like conditions (but without gravity) and can stably exist in liquid form. But, when we pour liquid water into space, it can no longer remain in liquid form. Two things can happen: it can either boil or freeze. So which one is it?

Oddly enough, the answer is first one, and then the other! The pressureless vacuum of space will first cause water to boil almost instantly. This will result in the formation of water vapor. But again due to very, very cold environment, the tiny vapor droplets (isolated water molecules) will immediately freeze (desublimate) and become ice crystals like snow. We know this because this is what used to happen when astronauts felt the call of nature while in space:

“When the astronauts take a leak while on a mission and expel the result into space, it boils violently. The vapor then passes immediately into the solid state, and you end up with a cloud of very fine crystals of frozen urine.” [3]

But one question still remains…

Why does it Boil first and then Freeze? 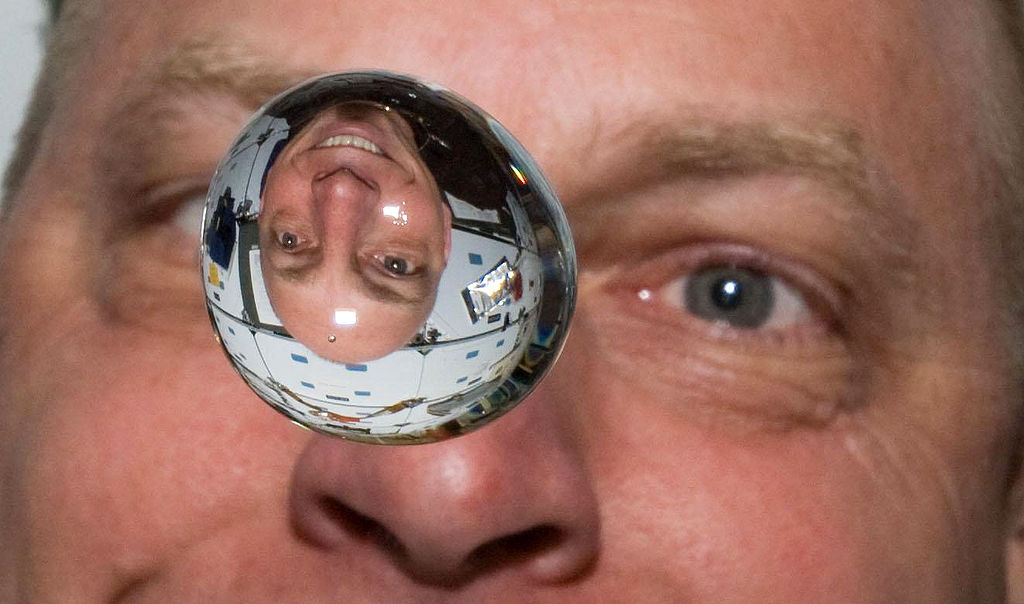 There is some physics behind this phenomenon. The specific heat of water is high (4.186 Joule/gram °C), due to which it’s really tough to change the temperature of water quickly. Furthermore, because of the surface tension, water tends to be in spherical shape in space (as you saw in the image above), which actually minimize the surface area exposed to the outer space. This again reduces the speed of freezing process.

So we see that, freezing process is much slower due to some physical properties of water. However, if we somehow expose every water molecule to the outer space, the freezing process will be faster.

Again as there is no such issue on the pressure, water can boil instantaneously turning into vapor. When water gets converted into vapor its volume increases and so its surface area. The molecules get farther apart. Then being exposed to the incredible cold space it starts freezing rapidly. This is because once we get below 210 Kelvin, we are going to enter the solid phase of water – ice, no matter what the pressure is. [4]

Hence, the water vapor starts freezing rapidly into solid giving rise to a fine network of ice crystals, a snow like structure.

Pouring water into the interstellar space and watching it form a network of very fine ice crystals is a great idea. It will really be a fun to see such phenomenon. Well, we have done almost the same thing here, on Earth. What happens when you take boiling water and, on a very, very cold (< 30°C) day, throw it up into the air?

Are you living in a cold place (Antarctica?) having a temperature less than 30°C? If yes, then you must try this experiment.

Do tell me your ideas and suggestions in the comments.

And thanks for reading. 🙂

All the non cited images are from Pixabay.com, Pexels.com, or Wikipedia.com and are available for Reuse under Creative Commons Licenses.

This site uses Akismet to reduce spam. Learn how your comment data is processed.

This site uses cookies to improve your experience: Find out more.